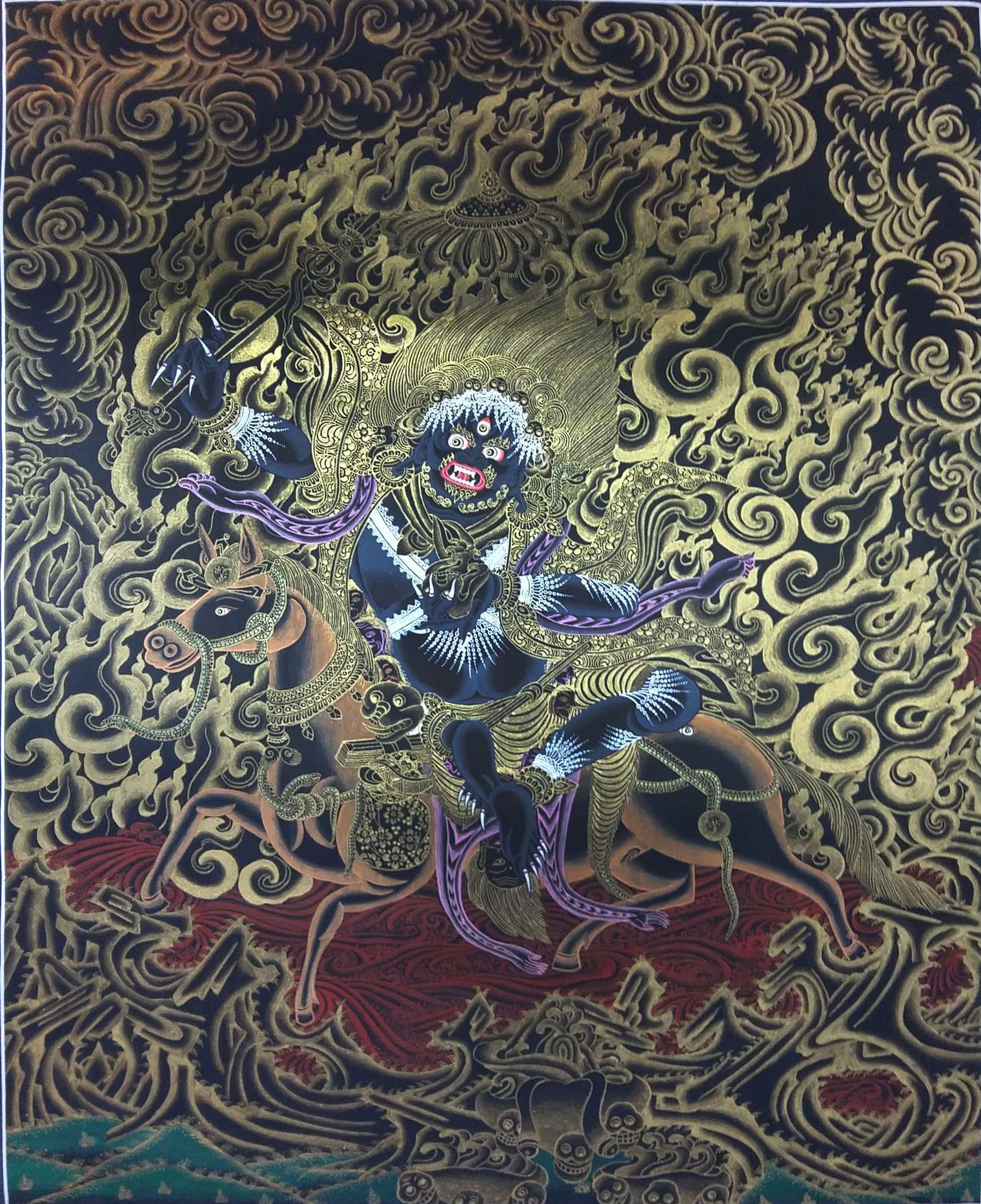 Palden Lhamo Tibetan Thangka is handpainted by Thangka Artist living in Kathmandu Nepal. Palden Lhamo is also called as Shri Devi in Sanskrit and Remati in Tibet. She is the wrathful deity considered to be the principal Protectress of Tibet.

She is a protecting Dharmapala of the teachings of Gautama Buddha in the Gelug school of Tibetan Buddhism.

“The tutelary deity of Tibet and its government”, and as “celebrated all over Tibet and Mongolia, and the potent protector of the Dalai and Panchen Lamas and Lhasa.”

she is said to reside in a lake within Tibet, called Lhamo Latso. The lake is charged with spiritual energy and is said to bestow visions of the future.

One of the methods to search for a new incarnation of the Dalai Lama, the search party will meditate and propitiate Palden Lhamo by this lake.

She is usually depicted in nakthang [black-ground style scroll] crossing the sea of blood riding side-saddle on a white mule.
There is an eye on the left rump of the mule which is the place where her irate husband’s arrow found a mark. She had killed her son and used his flayed skin as a saddle blanket.

Unlike the support of the other 7 Dharmapala, she is atop or surrounded by, the Himalayas. This not only indicates her association with that region but also her origin as Mahakali, daughter of Himalaya, the Indian deity. She also wears the garland of freshly severed heads characteristic of Kali.

The important distinction is that in this instance the sea of boiling blood, the corpses, and entrails are not associated with offerings intended to appease her.

Lhamo’s ultimate nature is as a support and a protector of the way of compassion. The personal protector of the Dalai and Panchen Lamas, Palden Lhamo is especially venerated by the Gelug denomination.

Her mule which she rides side-saddle is led through the flames by Makaravaktra, the Makara-headed dakini, with lion-head dakini Simhavaktra following behind.

Her steed is bridled and trimmed with vipers (like that of Freya, the Norse deity) from which hang a bag of diseases, a ball of magical thread, and her dice. One form of mo, the Tibetan system of divination by dice, is associated with her.

Palden Lhamo, Victorious Goddess-Defender of the Mahayana, was armed by the gods themselves. Hevajra is the one who gave her the dice to determine men’s lives.

Her peacock feather fan is the gift of Brahma. Kubera gave her a lion which protects and decorates her right ear. The naga king gave her a serpent for her left ear.

Vajrapani gave her a hammer to use as a weapon. Her mule is the gift of the other gods.

You need to Login first